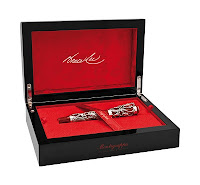 LOS ANGELES (January 11, 2011) - Montegrappa, Italy’s most revered manufacturer of fine writing instruments, today announced a second addition to the company’s “Icons” series of writing instruments which pay tribute to cultural giants in which their character and achievements lifted them to global awareness. The newest pen in the series honors legendary martial arts expert and actor, Bruce Lee.

To commemorate the 70th birthday of Bruce Lee, Montegrappa will introduce a re-interpretation of one of the company’s most coveted pens, “The Dragon.” Montegrappa first produced the original “Dragon” 15 years ago in 1,912 pieces to celebrate its founding year. It was produced in black mother-of-pearl celluloid and sterling silver. Only 100 fountain pens were issued in 18K gold. The fountain pen had a piston filling system, and was available with nibs in six widths. These pens can now be found solely – and rarely – in collecting circles.


“The Dragon 2010 Bruce Lee” limited edition series has been distinguished from the 1995 release by a change in the design of the pocket clip, a new color, the detail of the Dragon’s tail on the pen barrel, the fountain pen nib and the top of the cap. The pen also features a body and cap made of red celluloid with black veining, referred to as “cinnamon.” Topping the cap is the immortal yin-yang symbol, representing balance. The cap and the barrel are both embraced by exquisitely carved dragons, their eyes highlighted by rubies on the sterling silver version and by matching precious stones on the fully-encrusted versions. The nib itself features the profile of Bruce Lee in a famous move - foot and fist extended, suspended in air.

Montegrappa will produce a total of 2010 pieces, consisting of the following:

Offered in addition to the 2000 individual pens listed above will be 10 ultra-rare, three-piece sets consisting of fountain pen, roller ball and inkwell in solid gold with white diamonds.


“Bruce Lee truly embodies the fascinating and symbolic Dragon figure which Monetgrappa has skillfully interpreted into one of the world’s finest writing instruments. We are pleased to honor Bruce Lee in Montegrappa’s ‘Icons’ series in order to pay tribute to the global influence and acclaimed work of this legendary athlete and actor,” said Giuseppe Aquila, CEO of Montegrappa.