I have added a new social network site to the left hand column of the main page. Please join.
Posted by Brian Harrison at 10:51 am 1 comment: 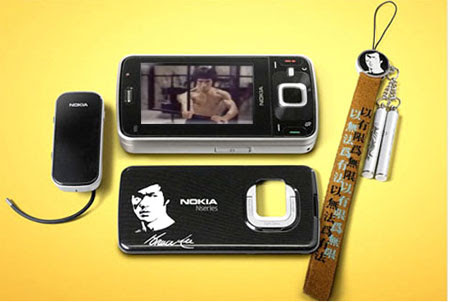 Technology giant Nokia has launched the special edition of ‘Nokia N96’, which has Bruce Lee’s image on the phone, in Hong Kong.

The Nokia N96 Bruce Lee limited edition phone features Bruce Lee’s face, signature on the back panel, and is also comes packed with rare pics of the ace martial artist and actor.

Moreover, the phone also comes packed with several accessories including a Bruce Lee doll and a nunchaku.

Nokia N96, which was recently launched, offers a memory size of 16GB, which can be increased to 24GB with an optional microSD card, permitting users to store hours of media and entertainment on the go.

The dual-side N96, which sports a 5-megapixel camera with Carl Zeiss optics and dual LED Flash, is a perfect of style and advanced technology and represents a complete new chapter in mobile technology. It is best optimized for superb web and entertainment.

The N96 can store up to 18,000 songs, around 20,000 effigies at 5 mega pixel, upto 60 hours of video or full length movies. With multifunctional media keys and a 2.8” screen, music, movies and games and will be available at the touch of a button.

The phone also packs in turn-by-turn voice navigation with geotagging and N-Gage gaming back up with Ovi to share up images online.

Other amazing features of the phone include built-in 3D stereo speakers, MPEG-4, Windows Media Video and Flash Video. Moreover, it is also compatible with USB 2.0 connection, WLAN and 3G HSDPA support. The phone comes along with a Bluetooth headset and a special wrist- band.

Posted by Brian Harrison at 9:40 am No comments:

Tony Leung is all fight these days as he gets ready for his role as Bruce Lee’s teacher.

HONG Kong actor Tony Leung Chiu Wai may have just gotten married, but instead of basking in newly-wedded bliss, his recent preoccupation has been with fighting.

At a press conference with some 300 Chinese and Asia-Pacific media members to launch Montblanc’s latest luxury chronograph watch on Nov 7, the multi-award-winning actor said he has been pulling eight-hour days working out for his role as Bruce Lee’s martial arts teacher.

Grandmaster Yip Man popularised the Wing Chun style of gongfu, and his biopic by director Wong Kar Wai will begin filming next autumn.

Leung, 46, added in Mandarin: “Making an action film requires you to have a certain physique, so I have to at least convince myself that I am a very good fighter.”

Asked why pre-production for the film has dragged on for about six years, the actor, who is Wong’s favourite leading man and firm friend, said: “Each time we wanted to start doing it, I was committed to another role. But now, I’ve stopped taking on new films, turning down some 10 projects. I want to concentrate on this.”Looking dapper in a black leather jacket-and-tie ensemble, he answered previously screened questions posed by an emcee onstage with his usual quiet serenity.

But Hong Kong’s tabloid writers perked up when the actor stated innocuously that he was planning to go on a ski holiday with friends later this year.

Scribes later interpreted this as a sign that his actress wife Carina Lau was not pregnant as previously rumoured.

The self-confessed perfectionist modestly said he does not feel he has made any masterpieces in his career.

However, he does not mind being a producer of or endorsing works by young, emerging talent.

But there is a caveat.

“Being an actor takes a lifetime. You can’t do everything at once,” he said.

Also present at the event was South Korean pop idol Rain, who was dressed in a grey suit and T-shirt, and sporting a sleek red hairdo.

In a separate chat through an interpreter, the lanky singer-actor, 26, told the emcee that he would buy a watch like Montblanc’s latest model to reward himself for working so hard, adding that he spent most of his time attending meetings.

When pressed, he admitted he would also get it for his fiancee – if he has one.

His ideal woman? “I like girls who are kawaii-style (cute in Japanese), innocent and pure.” – The Straits Times, Singapore / Asia News Network

The museum, located in Shunde, Guangdong Province, was inaugurated Sunday by Bruce's sister Phoebe Lee, who traveled from San Francisco for the occasion.

More than 1,000 items related to or used by Bruce Lee are on display, including costumes and photographs. Some letters and poems written by the martial artist are being exhibited for the first time, the report says.

The compound also includes a sculpture park that will feature the world's tallest Bruce Lee statue when the 18.8-meter-tall artwork is finished early next year.

Future meet-ups for Bruce Lee's fans are being planned, with which the museum's director Huang Dechao hopes to create a communication forum for worldwide fans.

There has been a resurgent interest in China over Bruce Lee, who passed away three decades ago, thanks to a new 50-episode drama series "The Legend of Bruce Lee," produced by China Central Television (CCTV). The drama, although controversial for some bloopers found in its scenes, has become the most-watched CCTV drama in history following its initial airing in October.

The movie, helmed by director Wilson Yip, is adapted from the story of Ip Man. It retells the life of the grand master of Wing Chun martial arts, known internationally as Bruce Lee's teacher.

One of Hong Kong's most popular partnerships, Wong Kar Wai and Tony Leung, will also make a biopic of the kung fu master. Their movie will start filming next summer, a report said.