The modest two-floor house where the Enter the Dragon star spent the last few months of his life in 1973 is currently a "love hotel", where rooms can be rented by the hour to amorous couples.

Outside the Romance Hotel, in the northern district of Kowloon Tong, there is no sign to indicate that one of Hong Kong's most famous actors ever owned the 5,000 sq ft house.

The building is now the battleground between Bruce Lee fans, a billionaire Chinese property tycoon, and the Hong Kong government.

After the enormous earthquake in Sichuan in May, Mr Yu announced his intention to sell the building, together with three surrounding plots. He said he would donate some of the money he raised to the rebuilding of Sichuan.

The Hong Kong Bruce Lee Club quickly intervened to stop him. A page on Facebook, the social networking site, was set up to marshal opposition to the plan and to turn the house into a museum.

Lee's widow, Linda Lee Caldwell, and daughter Shannon, have reportedly agreed to donate personal items to a new museum. A Bruce Lee museum is also in construction at Shunde in mainland China, where Mr Lee was originally from, but never lived.

Wong Yiukeung, the chairman of the fan club, said that while the island is happy to profit from Mr Lee's boost to tourism, little effort had been made to commemorate him. "Lots of tourists want to visit the house. I have to tell them to get a partner of the opposite sex in order to get in," he said.

Even Robert Lee, the younger brother of the film star, stepped into the fray. "My family finds it regretful that the Hong Kong government has not done much for my brother. I urge them to buy the residence and convert it into a museum," he wrote in a letter to Donald Tsang, the chief administrator of Hong Kong. The government, however, quickly ruled out spending public money on the building.

However, the protests have had an effect on Mr Yu. After failing to sell it, or swap it for government property elsewhere, he magnanimously agreed to donate the building, saying that it was "priceless in the sense that this is the last property with links to Bruce Lee in Hong Kong".

He told the South China Morning Post that Mr Lee had been instrumental in changing attitudes to China in the West: "Our weak national image only changed after his movies were shown to western audiences."

However, he said he would only allow the house to be turned into a museum if the government allows him to hugely expand the site into a 30,000 sq ft retail outlet.

His idea has not met with enthusiasm. "The building is a residence of a simple style without unique architectural claims. Houses like this are very common," said the Antiquities and Monuments Office. It added that expanding the site would destroy the cultural value of the house.

The deadlock has exasperated the fans. "We just have to wait now for the government to make up its mind," said Mr Wong. As a result, the 35th anniversary of Mr Lee's death went unmarked in Hong Kong, except for a small display in Mr Wong's tiny shop.
Posted by Brian Harrison at 6:24 pm 1 comment: 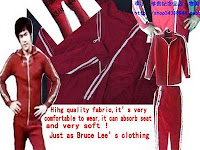 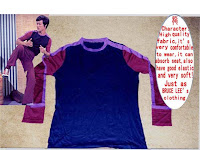 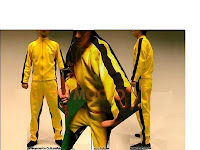 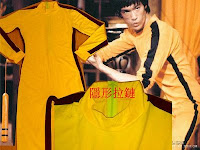 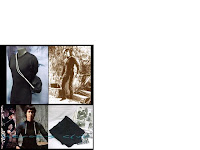 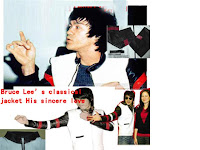 The Bruce Lee Action Museum would occupy a city block, soar three stories and cost up to $50 million to build.

Lee's surviving family members want to see the contemporary structure honoring the late action hero built in Seattle, his home from 1959 to 1964. His widow and daughter visited Seattle this weekend and unveiled the project plans on Friday during a private reception at the Seattle Art Museum.

The family commemorated the 35th anniversary of Lee's death, as well as the release of his film "Enter the Dragon." Lee died July 20, 1973 at the age of 32. He is buried at Lake View Cemetery.

The museum -- which Lee's family also refers to as BLAM -- would incorporate sleek architectural lines and focus on the themes of community, research, philosophy, action, scholarship, education and foundation.

"It's a great dream of ours," daughter Shannon Lee said at the reception. "We think of this project as a living thing."

The family is working with Carson Architects, a Marina del Rey, Calif. firm, on the project, which would include two outdoor plazas, a meditation room, a library and a 250-seat theater.

A wall near the entrance would have his image sandblasted in a mirror. A large yin-and-yang design would sit in a courtyard. And bamboo would wrap around most of the building.

"It's supposed to be what Bruce Lee was about," Thomas Carson, the firm's principal said. "Shannon and her mom really want it here."

Shannon Lee added: "Movement is a central part of the design."

The family spent the weekend searching for possible sites in Seattle to build the museum. They have been discussing the project with Carson over the past four to five years.

"It seemed like a natural progression," Shannon Lee said, explaining the museum's origins.

The Lee family and supporters said they would need to raise significant funds to achieve their goal.

Carson said the family intends to talk with Seattle officials about their plans for the project and that the museum would also be used to house the Bruce Lee Foundation, a cafe and a conference room.

Above the large rectangular entrance, visitors would see an image of Lee kicking in the air. His philosophical sayings would be inside on walls.
A Chinese lion dance team performed for Shannon Lee and her mother, Linda Lee Cadwell.

Lee was born in San Francisco and lived in Hong Kong with his family. He moved to Seattle after family friends, Ping and Ruby Chow, said he could work at their restaurant.

In Seattle, he met his first student, trained in Chinatown and studied philosophy at the University of Washington.

He also met Linda Emery, who took classes with him and became his wife. Their first date was at the Space Needle restaurant. The two were married on Aug. 17, 1964 at the Seattle Congregational Church.
Posted by Brian Harrison at 11:06 am 1 comment: